ALGONQUIN TERRITORY- Chimnissing Youth, Shaylynn Marsden was invited to attend a Faith Summit in Ottawa that brought together young millennial leaders to address questions related to faith in public life where she found herself at a sacred fire participating in a non related event to “unsettle” Canada.

Anishinabek Youth were the organizers of a reoccupation ceremony on Parliament Hill during Canada’s 150th Anniversary Celebrations as part of Idle No More’s, Unsettling Canada 150: initiated by the Bawating Water Protectors from Sault Ste-Marie.

“The call to action is to reaffirm our rightful claim to these lands as the original caretakers of Turtle Island and to demand the repatriation of the territories that were and are illegally seized by the Canadian state. This is not a celebration of Canada, but assertion of indigenous self- determination and sovereignties over our lives, lands, languages and cultures, among other aspects of living Mino-Bimaadziwin” explained groups call-out for support.

The Protectors erected a teepee on June 30th where some were arrested by RCMP and then released following negotiations where the teepee was eventually allowed to be set up on the grounds where the celebrations were to be held.

Shaylynn Marsden 23, from Chimnissing Anishinabek Territory who has an educational background in Criminal Justice and recently finished her bachelors Degree was in Ottawa for a Youth Leaders Summit on Faith.

“I was initially there to attend the 2017 Faith in Canada 150 Millennial Summit for three days. When I was first invited to attend I was hesitant and didn’t want to go there for Canada’s 150th celebrations and made that clear to the organizers.” Explains Shaylynn.

The Faith in Canada 150 Millennial Summit was a series of gatherings to bring together 75 Canadian millennials of differing faith convictions in Canada’s capital city on the eve of Canada’s 150th anniversary to address questions related to the place of faith in public life, the true nature of pluralism, and the meaning of religious freedom.

“On the second day of the summit it was a very lengthy day where there were discussions and on faith and religion and being an Indigenous person I felt I couldn’t relate to some of the questions as we are not a religious people.” Explained Shaylynn

Indigenous Youth are as diverse as the many Nations throughout Turtle Island who at times can struggle with identity and fitting in mainstream and carrying the issues of previous generations as they transition as tomorrows leaders today.

“I feel like I’m at a crossroads, where on one side our people are still hurt and healing and not ready to forgive and reconcile but on the other side there are people ready to take that next step, to help our people reconcile and be that voice. So that is what is what persuaded me to go to this Summit, to be the voice of our people. I feel like my generation is ready to make that change but we still need to help our people to heal. We can’t just say, we need to get over it.” Says Shaylynn who is currently working to continue her education in Law for next fall.

Prime Minister Justin Trudeau made an unannounced visit to the Water Protectors the day before Canada day and spent more than half hour in the teepee. 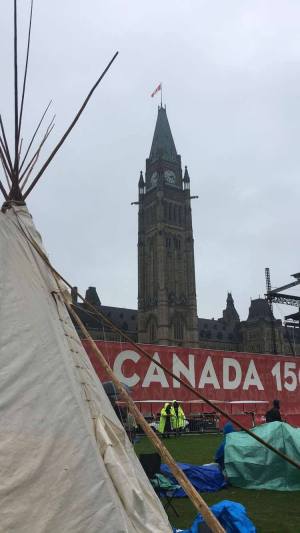 “On the third day of the summit I went with my friend to Parliament Hill as there was a callout to come and support the Water Protectors. When I got there the organizers were upset because Justin Trudeau just came uninvited and unannounced and they found it disrespectful as there were fasts going on and he wasn’t asked to come.” Explains Shaylynn.

Indigenous Leaders, Non-Native Activists were also present in support however the Protectors felt the need to share some feelings from the grassroots to Indigenous Leaders represented by Assembly of First Nations National Chief, Perry Bellregarde explains Shaylynn.

“Perry Belregarde was in the Teepee when we got there. The Youth told him the AFN is a very colonial governing body and he is part of the problem where he is not helping to decolonize the system. He got offended and ran off. It was incredible to be there and witness this act of resistance through ceremony.” Explains Shaylynn.

“I’m standing here on un-surrendered, un-ceded Algonquin Territory also known as Ottawa as a reoccupation of this land in resistance to Colonialism. There are fasters here in ceremony and we’re here to show resistance of colonialism and bring awareness as Canada celebrates its 150th Birthday.” Explains Measwasige.

a main focus of the youth explains Meawasige.

“We have that right of Self determination as Peoples, we have the Right to Free prior and informed consent and to be part of any decisions that will effect us. What is happening is Canada is letting Industry get away with so much that effects our people, lands and waters” says Meawasage.

Although Shaylynn was there to participate to answer questions of Faith in Public Life in a mainstream structured event organized by Canadians she eventually found herself at a Sacred Fire expressing what needed to be expressed in our own way.